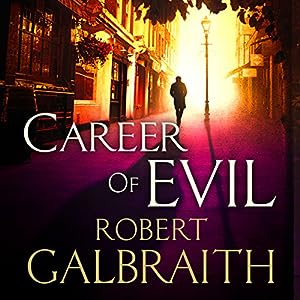 This is the third in the Cormoran Strike series. Robin (Strike’s assistant) is sent a leg in the post and Strike has three suspects that the police aren’t taking seriously. The book is again told from a third person narrator which is necessary to the story and it does make it easier to see individual story lines.

I didn’t really enjoy this instalment because the characters still read the same to me, with no character development. Although I enjoyed the storyline of Strike and Robin getting a bit closer, and learning more about Robin’s backstory, I hope in the next story that Strike develops a bit more. I did however like the continued presence of Wardle and Carver in the book, and also the introduction of Shanker – it adds a bit more to Strike’s character to see how he interacted with Shanker.

This time I really enjoyed the back story of Robin and Matthew – if you have read the book, you will understand that a lot of questions posed in the first two books in the series get some sort of answer in the book. I also lost a lot of sympathy I’d previously felt towards Matthew earlier in the series in this book.

I gave this book 2/5 on Goodreads – I had higher expectations of this book because it has great reviews on goodreads and youtube. However, I didn’t really like the deviation in the story from a single murder to solve to a serial killer on the loose. I kept getting confused about which suspect had which back story, and by the end of the story I just didn’t care. If this was the first book in the series, I probably wouldn’t continue reading the series – but I’m still looking forward to the release of Lethal White.