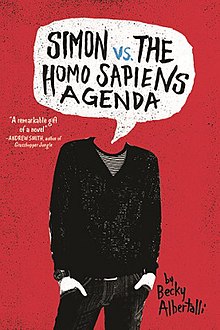 Simon vs the Homo Sapiens Agenda – Becky Albertalli – 2015 – YA LGBT

Simon Spier is sixteen and trying to work out who he is – and what he’s looking for. But when one of his emails to the very distracting Blue falls into the wrong hands, things get all kinds of complicated. Because, for Simon, falling for Blue is a big deal…

The book is told from Simon’s point of view, in first person which I tend to prefer. I liked Simon’s character and I felt he was quite believable (not being a gay teenage boy) but I could identify with some of his issues while he was chatting with Blue, and also some of the crap he goes through when he’s outed. I thought it was great he was so close to his drama teacher, but I imagine most LGBT+ kids don’t have that sort of support at school.

Also, a lot of people say they don’t like Leah but I felt a bit sorry for her when Abby and Nick just decided not to invite her to things. I wish that the story around that had been explained, so I’m hoping the sequel will go into that a bit more. I really didn’t like Abby though – I think because she was the antithesis of the sort of girl I was at school, yet people seem to identify much more with her when you read reviews. I’d have also liked more development of the other characters like Nick and Garrett. Nick is supposed to be Simon’s best friend, but he just feels so flat.

Some of my favourite scenes from the book (spoilers!) include the part of the email where Simon tells Blue that “I don’t think my heart can handle waiting a full week for an email from you.” I mean, how cute! And also where Simon finds Blue’s phone number in the t-shirt Blue gave him. Cute, but not sickly. I also really liked the reference to some of the Brit culture things in the book. You so often hear in YA books Brits referring to American culture, but here I was reading in an American book about Harry Potter and Dickens – made a nice change!

I did have problems getting into the book though – and it wasn’t until I read other people’s reviews that I realised others had the same issue. I’m not really sure when I started enjoying the book, rather than reading it because of the hype, but I found as I went on I really liked the prose just as I’d expected to.

I really enjoyed the ending of the book. I feel like it could just be a one-off (I’m not a fan of series), but there are enough questions to make a sequel worthwhile, and I’m looking forward to reading Leah on the Offbeat, especially because it’s a book where the main character is bisexual – there aren’t enough bisexual characters out there who are portrayed properly.

I gave Simon… 4/5 on Goodreads. I’d definitely recommend this book if you are even later to the party than I am! And I can’t wait to see the film adaptation – I think I’ve missed it in cinemas (my local never seemed to get it) but looking forward to it on DVD.

2 thoughts on “Book Thoughts: Simon vs the Homo Sapiens Agenda”