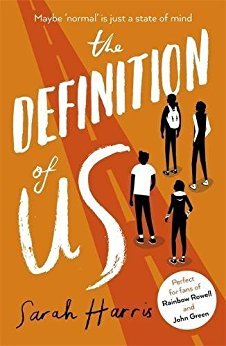 The Definition of Us – Sarah Harris – YA General Fiction

(adj.) Conforming to a standard; regular, typical or expected

(Florence) Round, smooth and bumpy like a cobbled street

Florence doesn’t always see things the way other people do. She feels different.

When Florence meets Jasper, Andrew and Wilf she can’t imagine they’d have much in common – with at least five mental health conditions between them, they all have very different reasons for being referred to Manor Lane Therapy Centre.

It’s only when their therapist, Howard, goes missing that they find a common purpose. Worried by his disappearance and wanting answers, the four of them decide to track him down.

As they cross the country in a ‘borrowed’ van, asking each other Ultimate Questions and facing a series of challenges along the way, they start to reveal their true selves – and Florence realises there’s more to all of them than just a diagnosis . . .

Maybe they’re not so different after all?

The story is told from Florence’s point of view, and she’s a likeable enough character but there’s not much to keep me wanting to read the story. If I hadn’t wanted to finish this book for Netgalley, I’d probably have DNF’d it. It’s not a bad book in it’s concept, but the execution bored me a little.

The central question is around what has happened to Howard, the teen’s therapist. The answer was a bit deflating as you are led up to this moment, and then nothing really happens. While it may be more “realistic”, it’s not an interesting end to the book. I was really excited for this book because of Goodreads reviews, but felt a bit let down.

I think this is an important book for younger teenagers around the issue of mental health. It has characters with different worries and issues, and I think that would be helpful to younger teens trying to find themselves in books.

Unfortunately for me as a reader the novel didn’t go deep enough into the mental health aspects. I found the characters quite flat and I didn’t feel very invested in the story. One character had depression but apart from talking a little bit about feeling worthless and suicidal thoughts, there wasn’t enough exploration of her treatment and other aspects of her mental health.

Another character had an eating disorder, and while it was great that the author made it a guy who had an eating disorder, it wasn’t explored in any real detail making it seem to readers with little knowledge of eating disorders that all they are is not being able to eat certain foods, but being OK with a bar of chocolate? If I’d gone into this book hoping to find a character like myself, I think I’d have been disappointed with the lack of development and insight into the characters’ problems.

The storyline also didn’t flow well, and instead felt like the author had written a list of moments she wanted to include and not really being sure how to link them together. A lot of the reviews on Goodreads have given this book five stars, and while I appreciate that it’s an important book for younger teens, for anyone interested in fiction for older teens or adults, there just isn’t enough depth.

I’d give this book 3.5/5. I think this is an important read for younger teens if they are interested in a lighter read with mental health themes, but for anyone wanting a more realistic portrayal with a less convoluted plot line, I’d probably give this one a miss.

I was given this book by Netgalley and Little Brown in exchange for an honest review.