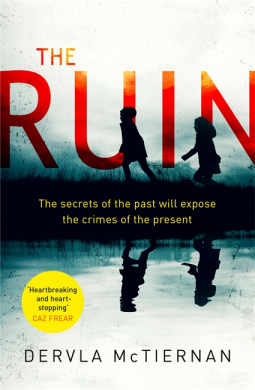 On his first week on the job, Garda Cormac Reilly responds to a call at a decrepit country house to find two silent, neglected children waiting for him – fifteen-year-old Maude and five-year-old Jack. Their mother lies dead upstairs.

Twenty years later, Cormac has left his high-flying career as a detective in Dublin and returned to Galway. As he struggles to navigate the politics of a new police station, Maude and Jack return to haunt him.

What ties a recent suicide to the woman’s death so long ago? And who among his new colleagues can Cormac really trust?

The book is told from the perspective of Garda Cormac Reilly, and I liked him as a character. I don’t normally read this genre, so I was really comparing him to Cormoran Strike from JK Rowling’s series, and I much preferred Reilly. He felt like a real character, and he was genuine in his motives throughout the novel. I think one of the strengths of the book was that the characters felt quite believable, and it felt like you were reading about an investigation actually taking place.

I also really liked the character of Aisling, and I felt a lot of sympathy for her in the novel. Of course she has just lost her partner so it’s to be expected, but McTiernan writes her well enough that you actually want to give her a hug through the pages.

This novel is quite slow-paced. Although I got used to that, I had gone in thinking it was going to be a thriller and I think I would have preferred it had I known from the outset it was a slow burning crime novel, rather than a faster thriller read. I did enjoy the plot however, and I was kept guessing until the reveal.

I think the ending of the novel was quite interesting, as you got to know the motive of the killer, and I think this novel would translate really well to a TV series because the climax was really tense.

I gave this book 4/5 on Goodreads. I’d recommend this book if you like crime novels. I’m never very good at guessing the answer in mysteries, and this book was no exception.