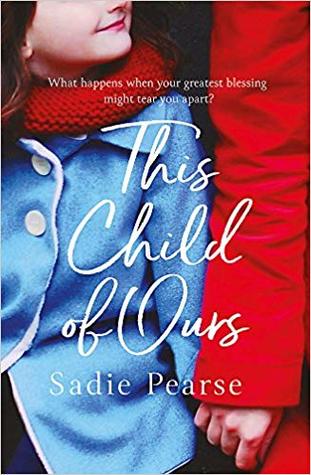 This Child of Ours – Sadie Pearse –

Riley Pieterson is an adventurous girl with lots of questions. There’s plenty she doesn’t know yet; what a human brain looks like. All the constellations in the night sky. Why others can’t see her the way she sees herself.

When Riley confides in her parents – Sally and Theo – that she feels uncomfortable in her own skin, a chain of events begins that changes their lives forever. Sally wants to support her daughter by helping her be who she dreams of being. Theo resists; he thinks Riley is a seven-year-old child pushing boundaries. Both believe theirs is the only way to protect Riley and keep her safe.

With the wellbeing of their child at stake, Sally and Theo’s relationship is pushed to breaking point. To save their family, each of them must look deeply at who they really are.

This novel is told from Sally and Theo’s perspectives, who are the parents of Riley, a child with gender dysphoria. From that sentence this book should have been exactly my cup of tea. LGBT fiction is one of my favourite “genres” . However I really couldn’t get into this book.

I found both Sally and Theo to be quite annoying as characters, set up as very modern people but I found something smug in the way they seemed to view themselves as so modern. For example, Theo says that he doesn’t have a problem with transgender adults yet for the majority of this book is very against his own child having gender issues. On the other hand, Sally goes into dealing with Riley’s gender identity at school and with family far too directly and doesn’t acknowledge her partner’s concerns, instead staying he is just not listening to his child.

Another issue I had was it felt like the book was based on a list of scenarios parents in this situation may find themselves in connected with very little plot. Because of the lack of real plot the book felt like it went on for too long and I just wanted to reach the end.

I gave this book 2/5 on Goodreads. I honestly thought I’d love this book but lack of plot and boring characters let it down. However, there are 9 other ratings on Goodreads for this book and only 1 other who rated below 4 stars so I’m in the minority!