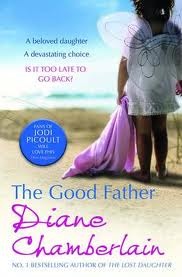 The Good Father tells the story of Travis, a man in his early twenties trying to raise his 4-year-old daughter Bella. He loses his job and his home and is offered a chance to make money, although he will have to commit a crime. Will he choose to commit the crime, even though he may lose his daughter in the process?

Diane Chamberlain is very good at characterisation and developing people that are interesting to read about. I really liked Travis as a character, he seems (as the title suggests) a good dad to Bella, although quite naive and weak-willed. It is understandable that he is like this but it feels a bit convenient for the story as he is also supposed to be intelligent. My favourite character was definitely Erin as I just felt like I could relate to her the most. Although I felt she was a bit convenient to the story rather than it being particularly realistic, I couldn’t help empathise with her story. I did also feel that the problems of the main characters were generally believable – Chamberlain often writes about problems people face in their everyday lives (poverty, grief…) and makes them more dramatic for the plot.

As I said the book’s central theme is whether to commit the crime and earn some money for Bella, or to potentially live on the street but not commit any crime. Although the answer is obvious as to what he will do (for the plot if nothing else) I don’t think this itself particularly affects the enjoyment of the plot.

Another of my favourite things about Chamberlain’s books is the setting of North Carolina. Perhaps to Americans North Carolina is not an “exotic” setting, but I love reading about the state as she describes it in her book, and it has made me really want to visit one day so I can properly experience the places she is talking about.

My main problem with the book was that it all just felt a bit too convenient. When Travis and Robin meet again, Robin’s status as the governor’s wife, Erin’s personality and overall presence in the book. There was not a lot of actual plot unfortunately, it just seemed to rely on these convenient situations to move the plot along.

I do however like the way that the book ended. Something I like about Chamberlain’s books is that she always adds an epilogue to finish the book and tie up the characters’ stories. Although they sometimes end up a bit “twee”, I always have nice feeling when I finish one of her books.

On Goodreads I gave this book 3/5 stars. Although I do enjoy the book overall, the plot isn’t the most interesting and I wouldn’t recommend this book to someone as a first Diane Chamberlain book.

As I’m currently not working, I watch a lot of Youtube videos which I started doing when I worked in Spain but still wanted to hear a lot of natural English!

So here I have listed my 10 favourite youtubers. It’s not in any particular order, but I have hopefully included an interesting range of channels. Leave a comment if you have any channels you think I should check out.

END_OF_DOCUMENT_TOKEN_TO_BE_REPLACED

An obvious first tag for my blog 🙂 I got these questions from Pretty Purple Polka Dots and it’s a pretty old tag but fun nevertheless. If you love Harry Potter and haven’t done this tag yet, do it on your blog and let me know!

My favourite is Prisoner of Azkaban – I am a huge Marauders fan, and this book has some of my favourite characters introduced.

If I had to choose, I’d say my least favourite book is Order of the Phoenix – for such a long book, it doesn’t feel like a huge amount happens. Plus this is the first book I ever cried at!

The Philosopher’s Stone – it’s so faithful to the book and the trio are so cute in it.