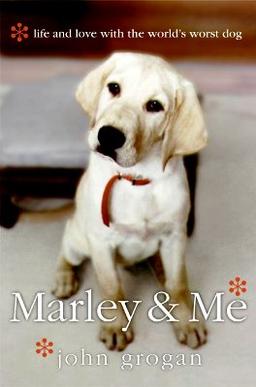 In case you didn’t see the 2008 film, Marley and Me is a memoir by John Grogan about his dog Marley that he raises from a puppy and the funny memories he has about their time together.

My favourite part of the book is hearing about Marley’s attempts at training. Although I haven’t seen the film of the book since it came out 10 years ago, it really reminded me of the film. The book was easy to visualise and as a dog owner I could empathise with many of the things that Grogan was saying and the book was very relatable. When the inevitable happens at the end of the book I had tears in my eyes because it was described so beautifully.

The cover of this book features a beautiful picture of Marley on the front and some cute pictures on the inside – it really helps you to visualise the stories Grogan is telling.

I gave the book 4 out of 5 on Goodreads. If you are a dog lover I would definitely recommend reading this book – it’s very moving. If you’re more of a cat person, I’d probably skip it as I think you have to be able to personally relate to the feelings Grogan is describing.